Haarlem is one of the oldest cities in Holland. In 1245 it received city rights, even before Amsterdam received them.

The river t’Spaarne played a major role, because the river was part of an old transport route between Leiden and Amsterdam. Haarlem was a toll town and for the transit of goods one had to pay tax. In addition to transport, beer breweries and textile industries were also of great importance to the city.

The city was fortified and had city walls 7 meters high. During the Eighty Years War it took the Spanish soldiers in 1572 half a year to conquer this city. Kenau Simonsdaughter Haselaer has to be mentioned here. This brave widow and businesswoman helped defend the city during the Spanish siege together with 300 other women. Kenau has become a Dutch concept and has embraced so much as a brave, bossy and unyielding woman. No jokes with Kenau!

The Dutch language use in Haarlem is generally seen as the standard. It is called General Civilized Dutch (ABN).

From Amsterdam to Haarlem it takes you 20 minutes by train. The Haarlem train station is the oldest in the Netherlands. By car it takes the same time. 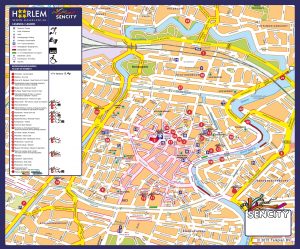 City map of Haarlem, download the image on your device and you can zoom in.

Things to do in Haarlem

Once you are on the market square, you feel the atmosphere of an old city that is bustling; old neighborhoods, old facades, many courtyards, 15th-century churches, including the impressive St Bavo cathedral, and canals dug since the 13th century, and preserved to the present.
Golden Age painter Frans Hals is a famous son of the city witnessed by the Frans Hals museum.

All the Haarlem museums are worthwhile visiting. Shopping in Haarlem is lovely. Visit the Haarlem markets. Finish you daytrip to Haarlem in one of the many fine restaurants. 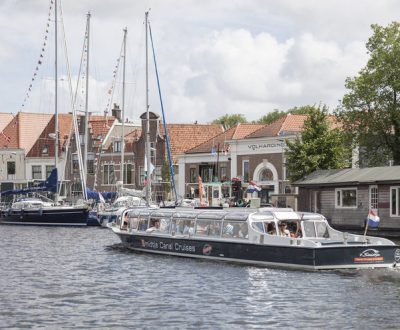 50 minutes
Discover the beautiful historic city center of Haarlem during this fun cruise of 50 minutes. You sail past many sights including; mill de Adriaan, the house of Barnaart; the first mayor of the city, the Patronaat and the city theater. The boats are heated during the winter months. With the hop on hop off you […]
From€14.00
0
View Details
Read More