Delft is a beautiful and picturesque town. From a rural village in the early Middle Ages Delft developed into a city and in 1246 it received its charter.

The town has a strong association with the Royal House of Orange and started with its founder William of Orange who resided there. During the Dutch resistance against Spanish occupation, known as the Eighty Years’ War Delft was one of the leading cities.

The famous painter Johannes Vermeer was born here and lived and worked here all his live. Other painters at that time were Pieter de Hoogh, Carel Fabritius and Nicolaes Maes. Memorable is the Delft Explosion on October 12th 1654 destroying most of the city. Over a hundred people were killed. Amongst them Carel Fabritius, Rembrandt’s most promising pupil.

Plenty places to visit in charming Delft. The old church; the new church within it the funeral vault of the Royal Family; Prinsenhof (Princes’ Court) which is now a museum but prince William of Orange used to live there and was also killed there in 1584. The holes in the wall made by the bullets are the silent reminders of this tragedy.

how to het there?

From Amsterdam to Delft you can take e train to Delft train station. It takes about 1 hour. By car in takes about the same time. 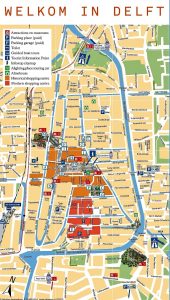 City map of Delft, download the image on your device and you can zoom in.

Things to do in Delft

Delft is in The Netherlands and the rest of the world famous for its Delft porcelain known as Delft Blue. Buy a perfect souvenir to remind your trip in our country.

The beautiful Delft City Hall; The Oostpoort (East Gate); The Vermeer Centre; The historical weigh house and windmill De Roos (the Rose). And last but not least the beautiful historic town center and the Delft canals.

While you are there, you might become world famous. Johannes Vermeer painted a city portrait that became known as: Het straatje van Vermeer (The little street). Experts are still arguing about the location of this path in Delft. Nobody seems to know.

Perhaps you will find it and if not enjoy your city walk all the same. Enjoy your visit to Delft.