Amersfoort received its town charter in 1259 and is a beautiful city from medieval times. It has many impressive buildings. Large parts of its ramparts, amazing town gates and canals are completely intact and being well preserved. There are so many old structures. It’s a journey back in time and all within walking distance.

Amersfoort is also named the Keistad (Boulder city). A big stone that gave the town its nickname. Story goes that in the old days 400 inhabitants dragged the 7000 kilo stone within the city walls. And all because of a ridiculous bet. Visitors made fun of this rather stupid action and embarrassed locals buried the boulder. By accident it was found during excavations in 1903 and from then on the stone was exhibited as a symbol of pride.

From Amsterdam to Amersfoort by train takes about 30 minutes, By car in about the same time. 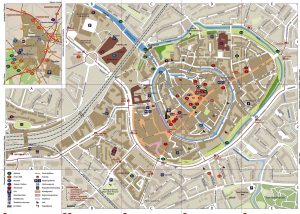 City map of Amersfoort, download the image on your device and you can zoom in.

Things to do in Amersfoort

Walk through the old centre so well preserved. Visit the Onze Lieve Vrouwe Tower known by the locals as Lange Jan (Tall John). Come and see the Koppelpoort  the beautiful town gate. And the rest of the 400 monuments (!) Visit the Amersfoort zoo. Shopping in Amersfoort city center is lovely. Relax by the end of the day on a lovely terrace or nice pub before finding a good restaurant.

Did you know that the painter Piet Mondriaan was born here and that this house is open for visitors? A day trip to Amersfoort is great fun .