Clogs are being crafted out of one piece of wood. For as far we know, since the 13ht century the Dutch people began to wear these shoes. Sustainable and water resistant, which made it useful to wear on wet soil. In other country’s it was also common to wear these, but somehow it became an icon of our country, the Dutchman wearing wooden shoes. Perhaps the Dutch people used to wear them more than the other cultures did. Fieldworkers and farmers still wear them nowadays. Anyway, it has become a national product and we present it with proud as a part of our cultural history.

A handful of clog makers have stood the test of time and still make the clogs on a traditional way. Visit one of these, because it’s the only place where you can do so! 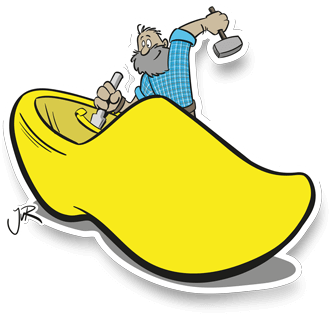 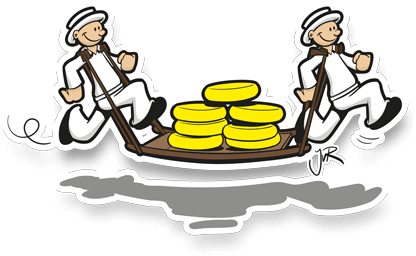 In the Netherlands we know a few types of Dutch cheeses; Gouda, Edammer, Beemster and Boeren kaas (cheese) which also enjoy international fame. Cheese heads, people like to call us.. so many cheeses, one more tastier than the other.

History tells us that around 800 before Christ, cheese was already been eaten, pottery jars containing remains of milk fat have been found. In the northern parts of the Netherlands a lot of cattle were kept, so a lot of milk was produced. Since the middle-ages the Netherlands is known for its cheeses.

Are you interested in how cheese is being made? Visit a farm and be part of the cheese making process.

Another craft that has to do with cheese is the carrying of the cheeses done by the ‘cheese carriers’. During high season you can visit a cheese market and watch these ‘cheese carriers’ and the traditional cheese trading process get to action.

In the Netherlands the first windmills appeared around the year 1200 and also the first millers came to life. Mills where essential for food production, pumping water away and for sawing goods. Things first done by hand could now be done by mills and this was many times  faster. Every village or city had its own mill, mostly owned by a noble man and the miller worked for him. From the 16th century many mills appeared and brought great wealth to our country. It was the first type of industry and being a miller was an important job in those days.

Do visit a mill, it is a piece of art and it feels special to be inside. It’s amazing to see how this old technique still works. From upon the attic to the ground floor it is a wooden machine that’s very sustainable. Meet the miller and get to know the story. 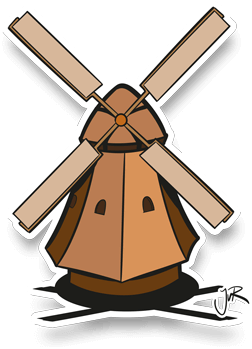